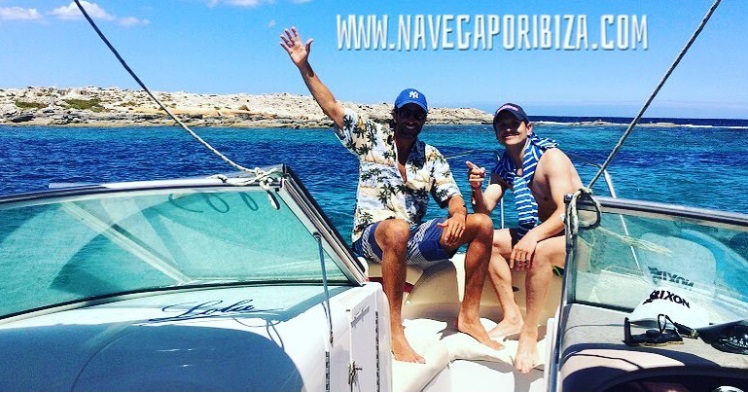 Diego and Navega’s story of Ibiza

Laboratory technician and industrial maintenance, the trades of a boy from Calahorra, a village in La Rioja, who studied and worked in these fields until I discovered my passion for the sea and boats. Feeling the sea while sailing, discovering hidden places, the bottom of the sea, taking care of it, respecting it and my great satisfaction, making beautiful days for you when you visit me, these passions are the ones that have me very involved in this world of the sea in the islands of Ibiza and Formentera.

My passion for the sea and boats really began about 7 years ago, late passion yes, but a real discovery to find it, life took me to Ibiza one summer in 2011, my company in which I worked in Calahorra in renew able energy enters ERE and such a month of March of that year a great friend told me, the possibility of going to work in Ibiza, my great friend Luis or Sito as better known, I owe much of this change in my life to him and his wife Tania something or fall this change in my life.

I start that same summer in a famous hotel in Ibiza in which there are parties every day, with the daily visit of the last DJ soft the world level, sure that you already know which can be, it was not a very good summer for me, many disappointments in that hotel, in which I had put many expectations, I began to realize that I was going to become a man in that island, since almost a month after being in the island I almost returned home again, But I decided to stay thanks to some words of my friend Sara who said to me “you are a coward for leaving, and chas” I decided to stay and fight, thanks to that in that same summer my friend Cruz and Toni lifeguards of the hotel invited me one after noon to a sailboat, to Alex’s sailboat, a sailboat of 10 meters of which I fall in love with his explanations of the sea and his work, I discover more days with them and every time I became more convinced that I wanted to live in that way of the sea and to make happy the people who visit edit.

Summer came to an end and I decided to look for a nautical school and get down to work, I wanted to be there for a summer with my boat. My first teacher, Juan Manuel Herrea in Pamplona, he initiates me in this world, and helps me to look for our first boat, a few months studying and it would be the first to f the titles that I have obtained.

I talk to my friends Tania and Sito who support me blindly, and in March we found in Mahon in Menorca what would be our first boat, I will always remember my first crossing, Menorca, Ibiza with Dani the great captain and country man we took La Bella Lola to Ibiza, 36 hours in total was the time that lasted that first crossing.

It was my first great experience, 36 hours of non-stop rain, wind and waves, fantastic. In a few hours summer 2012 began, I found my self with my boat in the port of Ibiza, dizzy and with my guts a little up set but wanting to learn and sail and travel the islands from end to end and find all the most hidden and magical places of the island, my great adventure began, a dream that was coming true and that today is already real.

On this path of clients, friends, learning, sailing and more sailing I meet the one who is now a great reference for me on this path of growing and doing things well, there I go when I have any doubts, the great guru of Google, José Navas, answers and outlets forever, and voice notes of almost hours, great affection and admiration for him.

Mycousin Oscar San Martin still remembers those voice notes and that first summer working together, cousins in Ibiza. A great blind help to his cousin but with a great Navarrese head, now after 4 years I am still trying to convince him to work together, but his village San Adrián, of which he is very proud, does not let him come to Ibiza again.

For the fourth summer, after the absence of my cousin Oscar, I went to one of my friends from my village of Calahorra, Arturo, footballer, electrician, skipper, swhoman and other trades that has and develops. I told him “come to Ibiza, I need people I trust”, those were my words and even with his little experience he did no the sit to come and support me this summer, in charge of the motor boat Lola he did a great season, the truth that we were all surprised by his work and dedication and hours getting great recognition from our friends and customers reflected in TRIPADVISOR.

Here it all begins, with the first boat called La Bella Lola, named after Lola, my god daughter, daughter of Sito and Tania, and already taking six consecutive summers of great struggle and effort in summer and winter. Ana has been with me all this way, a tireless and faithful helper, and I can already say that I love my work, the sea, sailing and making those of you who visit me happy, which is the great personal enriching satisfaction that a person can have.

Thanks to all of you who have been part of my dream, without you two would not have been possible, you have all contributed something and my gratitude will always be forever.

Discover all our boats for charter in Ibiza and don’t forget to leave me a review to support us and keep growing with you.

You can find out more about which cookies we are using or switch them off in settings.

This website uses cookies so that we can provide you with the best user experience possible. Cookie information is stored in your browser and performs functions such as recognising you when you return to our website and helping our team to understand which sections of the website you find most interesting and useful.

Strictly Necessary Cookie should be enabled at all times so that we can save your preferences for cookie settings.

If you disable this cookie, we will not be able to save your preferences. This means that every time you visit this website you will need to enable or disable cookies again.

This website uses Google Analytics to collect anonymous information such as the number of visitors to the site, and the most popular pages.

Please enable Strictly Necessary Cookies first so that we can save your preferences!